the ladies who
GO GO GO

Two useful kinds of ACM notices, are published every few days, and are available to non-members

- ACM CareerNews is available to everyone -- members and non-members. ACM members can receive an email alert to the table of contents, as a benefit of membership.
ACM CareerNews is intended as an objective career news digest for busy IT professionals. Views expressed are not necessarily those of ACM.

Equipay - Comedy Hack Day SF 2016 Grand Prize Winner amazingly good, funny & brutal.
Pulling data income data from US Department of Labor, Equipay allows you and your friends to split the cost of a meal in accordance with gender and racial income inequalities. Bill-splitting app that splits the bill fairly. No really, fairly. Reparations one meal at a time.

Eve Adams | @HackerHuntress
Seasoned technical recruiter Eve Adams provides infosec-specific insight on writing resumes that get you the kind of attention you want, getting short-listed for cool positions before they’re even posted, strategically riding infosec employment trends, and how to most effectively work with those delightful recruiters. This talk will have something for those just entering the workforce, mid-career security professionals, and former VAX hackers alike! Bio:
Eve Adams is Senior Talent Acquisition Expert at Halock Security Labs, a full-service information security advisory in Schaumburg, IL. Eve leverages three years of security staffing experience to drive recruitment for both internal Halock roles and client placement. She also spearheads Halock’s social media presence and counts Twitter as one of her most powerful recruiting tools. She’s passionate about information security, thinks most recruiters are doing it wrong, and naively believes technology can change the world for the better. In past lives, she has been a writer, translator and reptile specialist, among other things. While she is officially OS-agnostic, she runs Ubuntu 12.04 at home.

Was Also a Precocious Scientist --- woooo hoooo-----
While carrying out her investigation into a new, “environmentally friendly” method of converting waste into useful forms of energy, and maintaining the straight-A average she'd managed since grade school, Ms. Portman already was a rising movie star. And then she went on to Harvard University to study neuroscience and the evolution of the mind. Ms. Portman is one of a handful of high-profile actors who happen to have serious scientific credentials — awards, degrees, patents and theorems in their name.

the actress habitually regarded as “that most beautiful woman in Hollywood,” was a rocket scientist on the side, inventing and patenting a torpedo guidance technique she called “frequency hopping,” which thwarted efforts to jam the signals that kept the missiles on track.

Bridge to the Doctorate, Louis Stokes Alliance for Minority Participation

The director of the program is Dr. A. James Hicks, Ahicks@nsf.org Others involved are Dr. Victor Santiago, vsantiag@nsf.gov who is the Deputy Director , Division of Human Resources Development. Dr. Cora Marrett, Assistant Director of, Directorate of Education and Human Resources, cmarett@nsf.gov.
These people were extremely helpful in gathering resources for
broadening engagement and STEM initiatives.
Alliance for Broadening Participation and LSAMP

Very interesting results from this just issued report, it claims that the gender gap in scientific academia is entirely explained by fertility decisions and that at each stage of academic promotion single women do better than single men.
NBER Report Abstract Many studies have shown that women are under-represented in tenured ranks in the sciences. We evaluate whether gender differences in the likelihood of obtaining a tenure track job, promotion to tenure, and promotion to full professor explain these facts using the 1973-2001 Survey of Doctorate Recipients. We find that women are less likely to take tenure track positions in science, but the gender gap is entirely explained by fertility decisions. We find that in science overall, there is no gender difference in promotion to tenure or full professor after controlling for demographic, family, employer and productivity covariates and that in many cases, there is no gender difference in promotion to tenure or full professor even without controlling for covariates. However, family characteristics have different impacts on women's and men's promotion probabilities. Single women do better at each stage than single men, although this might be due to selection. Children make it less likely that women in science will advance up the academic job ladder beyond their early post-doctorate years, while both marriage and children increase men's likelihood of advancing.

Association for Women in Science (AWIS)

The Society of Women Engineers (SWE)

The APS Committee on Minorities (COM) works to increase the number of historically under-represented minorities, notably African-Americans, Hispanic, and Native Americans, who earn degrees in physics and pursue successful careers in physics in the United States. COM conducts site visits and offers a minority scholarship for undergraduate physics majors. Other programs include the annual Edward A. Bouchet Award, travel grants, and the Roster which lists names and qualifications of over 3500 of women and minorities in Physics.

The Committee on the Status of Women in Physics (CSWP) offers a variety of programs and publications to address the encouragement and career development of women in physics. These include site visits to assess the climate for women in physics departments, the Gazette newsletter, and travel grants. The Roster lists names and qualifications of over 3500 of women and minorities in Physics. At each March and April APS meeting, CSWP co-sponsors a reception with the COM. 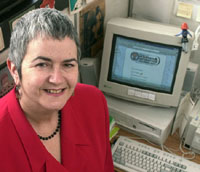 Joan Korenman Ph.D. Center for Women and Information Technology, University of Maryland, Baltimore County (UMBC) wins San Francisco Women on the Web 2001 Award
The Center's mission is to encourage more women and girls to become involved with information technology, both as users and as professionals in the field. The Center's web site includes resources that further the mission. They include a very extensive collection of news articles concerning women and IT; announcements of conferences, and calls for papers; an extensive bibliography of books about women and information technology that includes links to reviews, interviews, web sites, etc.; links to women-related web sites focusing on Science/Technology, on Internet Information, and on resources for girls; information about women-related email lists in Science/Technology; and a vast collection of web-based syllabi for women- and gender-related courses, including courses focusing on women and science/technology.

Bridging the Gender Digital Divide: A Report on Gender and ICT in Central and Eastern Europe and the Commonwealth of Independent States – This United Nations report by Lenka Simerska and Katarina Fialova includes an inventory of gender equality projects and resources for the information society in the CEE/CIS region. It also "highlights the need for increased action to address imbalances between women's and men's access to and participation in ICTs" in the region and "emphasizes the powerful potential of ICTs as a vehicle for advancing gender equality."

Focusing primarily on information technology, the bibliography is comprehensive as of 2005 and draws on international research as well as intervention literature. "Gender and Technology: A Research Review."


Abstract of "The effect of gender on children's software preferences" by R.W. Joiner. Journal of Computer Assisted Learning, Volume 14(3). September 1998.

Computers and the Internet: Listening to Girls' Voices –
Dorothy Ellen Wilcox concludes that "instead of socializing adolescent girls toward docility, non-hierarchical technology like the Internet may provide a discourse for development of higher-level cognitive skills and the ability to unmask inequities in power and politics." 1996

Gender Issues: Women's Participation in the Sciences compliance with Title IX enacted by Congress in 1972 to bar gender discrimination in "any education program or activity receiving federal financial assistance"

Museum of Women in Science & Technology

The National Action Council for Minorities in Engineering

The Society for Advancement of Chicanos and Native Americans in Science

Women, Minorities, and Persons with Disabilities in Science and Engineering [NationalScience Foundation]

Why Undergraduates leave the Sciences