March is Women's History Month
When we recognize and celebrate the diverse and historic accomplishments of women by providing information and educational materials and programs.

The Educational CyberPlayGround (founded by a Karen Ellis) provides many wonderful resources to help you discover the important contributions and achievements made by women throughout our history. We hope you will find information to use all year round and for a lifetime of learning. 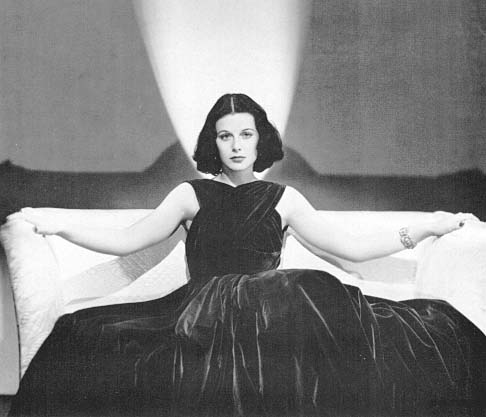 Born Hedwig Eva Kiesler in Vienna, Austria, she was the daughter of Gertrud (Lichtwitz), from Budapest, and Emil Kiesler, a banker from Lviv. Her parents were both from Jewish families.Her inspiration for inventing a radio that broadcast on different frequencies came from watching a player piano paper go around with different holes in the paper. She gave the idea to the US War Department, which led to a radio guiding system for torpedoes that was used in World War II. She had supposedly gained the knowledge from her first husband, Fritz Mandl, an Austrian industrialist and arms dealer who philosophically and financially supported the Nazis. He was abusive and brutal to her, and she finally managed to escape him, and Austria, by drugging her maid.

Was co-inventor (with composer George Antheil) of the earliest known form of the telecommunications method known as "frequency hopping", which used a piano roll to change between 88 frequencies and was intended to make radio-guided torpedoes harder for enemies to detect or to jam. The method received U.S. patent number 2,292,387 on August 11, 1942, under the name "Secret Communications System". Frequency hopping is now widely used in cellular phones and other modern technology. However, neither she nor Antheil profited from this fact, because their patents were allowed to expire decades before the modern wireless boom. She received an award from the Electronic Frontier Foundation in 1997 for her pioneering work in spread-spectrum technology.

THE RIGHT OF AN EDUCATION FOR GIRLS
Forgotten ---- a magical song by John McCutcheon
Honoring Mala La Yousafzai target of the Taliban.

I can remember when I was 13 --
1963 Prediction of the home Computer was Clearly a man's world for Susie Homemaker.

Nastalgic memory of the 1990's "The Kids Guide to the Interent"
And it's NOT JUST FOR BOYS EITHER 2:21

Female Inventors: The Wonder Women who were the first computers.

Yes, that is where the name comes from . . . the women who did it by hand, who did the math with pencils and paper! We were the computers, we figured it out by ourselves and we win the smart-epants award.

Male bro-*coders vs. Female Inventors: The Wonder Women who were the first computers.

In 1987, Congress expanded the celebration to a month, and March was declared Women's History Month. PDF

Before 1970, women's history was rarely the subject of serious study. Since then, almost every college offers women's history courses and most major graduate programs offer doctoral degrees in the field.
The public celebration of women's history in this country began in 1978 as "Women's History Week" in Sonoma County, California. The week including March 8, International Women's Day, was selected. In 1981, Sen. Orrin Hatch (R-Utah) and Rep. Barbara Mikulski (D-Md.) co-sponsored a joint Congressional resolution proclaiming a national Women's History Week.

TOP SECRET ROSIES
"In 1942, when computers were human and women were underestimated, a group of female mathematicians helped win a war and usher in the modern computer age. Sixty-five years later their story has finally been told."

Congress may soon consider the Paycheck Fairness Act (S 766/HR 1338), which would enhance provisions of the Equal Pay Act of 1963 and close loopholes in that law and other statutes in order to close the wage gap between men and women workers. Working through the Equal Employment Opportunity Commission (EEOC) and the Office of Federal Contract Compliance Programs (OFCCP), the bill would enhance enforcement of equal pay requirements, provide resources to government agencies for use in training staff to comply with the laws, as well as empower women to negotiate more equitable salaries, contracts, and benefits.
Paycheck Fairness Act S. 766 Clinton (D-NY) H.R. 1338 DeLauro (D-CT) Wage discrimination. Amends the Equal Pay Act to provide for expanded penalties and enhanced enforcement of prohibitions against sex discrimination in the payment of compensation. Prohibits employers from retaliating against employees who share pay-related information with co-workers. S. 766 was introduced on March 6, 2007, and referred to the Senate HELP Committee. H.R. 1338 was introduced on March 6, 2007, and referred to the House Education and Labor Committee.
American women earn only 77 cents on every dollar earned by men, a figure that adds up to nearly $10,000 in median annual income disparity. The disparity is even greater for minority women. This gender wage gap persists even when relevant career and family attributes are taken into account, suggesting that sex discrimination still plays a role.

Gender pay gap emerges early, study finds 4/23/07
"One year after graduation, a pay gap turned up between women and men who studied the same fields."

NASA Astronaut Karen Nyberg, a lifelong lover of sewing, is inviting fellow crafters to join her in stitching together a global community space quilt. Nyberg, in the final weeks of her mission, recently shared a star-themed quilt square she was able to complete inside the International Space Station. Now, she's inviting quilters from the public to create their own star-themed quilt squares to help celebrate her mission and passion for the quilting arts. The International Quilt Festival and Nyberg will work together to have the squares stitched together for display at the 40th annual International Quilt Festival in 2014 and other public displays. For Nyberg's complete biography, visit: http://www.jsc.nasa.gov/Bios/htmlbios... For more information about Nyberg's personal sewing hobbies visit: http://go.nasa.gov/CraftyKaren

The Best of Systers Blog Posts

The National Register of Historic Places is pleased to promote awareness of and appreciation for the historical accomplishments of American women during Women's History Month.

How girl geeks can get the best tech jobs, Women! Embrace your inner geek.

First Computer Programmers Inspire Documentary
Decline in Numbers of Women in Computer Science Threatens U.S.
Competitiveness, Say Experts By SUSAN DONALDSON JAMES Dec. 4, 2007 (ABCNews)
http://abcnews.go.com/Technology/story?id=3951187&page=1
During World War II the Army ran out of male mathematicians and turned to six women to program the world's first computer - ENIAC. Historian Kathy Kleiman (left) has recorded oral histories of these women - now in their 80s - in her upcoming documentary film, "Invisible Computers."  ...At 83, Betty Jean Jennings Bartik -- a devoted bridge player and grandmother of five -- had a secret past that was invisible to many who knew her.Her grandson Alex knew her story. He stormed out of school one day when his teacher refused to believe his gray-haired granny was a computer pioneer who had calculated firing tables and ballistic trajectories during World War II. The boy's parents had to explain to the teacher that Bartik and five other women had, indeed, legally hacked one of the world's first computers, converting it into a stored machine and eventually helping to usher in the digital age.

The Book of Household Management published 1859-1861 by Isabella Beeton in 24 monthly parts. Find "information for the mistress, housekeeper, cook, kitchen-maid, butler, footman, coachman, valet, upper and under house-maids, ladys-maid, maid-of-all-work, laundry-maid, nurse and nurse-maid, ... also, sanitary, medical, & legal memoranda; with a history of the origin, properties, and uses of all things connected with home life and comfort." Also includes recipes. From the University of Adelaide Library.

Amara Angelica is on the National Space Society Board of Directors
A radio amateur operator (KF6TEJ) She is editor of internationally renowned techno-futurist Ray Kurzweil's web site (KurzweilAI.net) and newsletter, Accelerating Intelligence. She has a background in aerospace engineering, having held positions at Grumman Aerospace as human factors engineer on the Lunar Module and in mission and operations analysis for electronic warfare and electronic intelligence systems.
Amara has an extensive background as a technology and science journalist, writing for InfoWorld, TechWeek, Computerworld, Broadcast Management/Engineering, The Futurist, CoEvolution Quarterly, and other publications. She also has a background in public relations and advertising, especially in writing technology/science white papers. She is the author of “Communicating with the Universe,” in the book, Year Million: Science at the Far Edge of Knowledge (2008). She also has experience as a book editor (Ray Kurzweil's two recent books), inventor, radio producer/engineer/host, video scriptwriter/producer, electronic synthesizer musician/composer, webmaster, and web programmer.
Amara has been a strong supporter of space settlements since the early 70s, working with NSS Board of Governors member Barbara Marx Hubbard, NSS Board of Directors member Stan Rosen, and other space futurists, and with the World Future Society. She is also a member of the Space Development Steering Committee, working closely with noted author and NSS Board of Governors member Howard Bloom, NSS Senior VP Mark Hopkins, and other leaders in strategy and promotion.

500 Years of Women in Art and Film