More information in the Linguistics Area 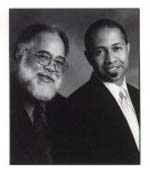 Find out about my Books

John R. Rickford is Professor of Linguistics at Stanford University, where he has been a faculty member since 1980. From September 1998 he will also be Director of the Program in African and Afro-American Studies and Martin Luther King Jr. Centennial Professor at Stanford. He received his BA with highest honors in Sociolinguistics from the University of California, Santa Cruz, in 1971, and his Ph.D. in Linguistics from the University of Pennsylvania in 1979. He won a Dean's Award for distinguished teaching in 1984 and a Bing Fellowship for excellence in teaching in 1992. His interests include sociolinguistics, especially the relation between language and ethnicity, social class and style, language variation and change, pidgin and creole languages, African American Vernacular English, and the applications of linguistics to educational problems. He is the author of numerous scholarly articles, including "Suite for Ebony and Phonics" in the December 1997 issue of Discover magazine. His books include Dimensions of a Creole Continuum (1987), Sociolinguistics and Pidgin-Creole Studies (ed., 1988), A Festival of Guyanese Words (ed., 1978), Analyzing Variation in Language (co-ed., 1987), and African American English (co-ed., 1998). He is currently co-authoring a book on African American Vernacular English, and co-editing two others on Stylistic Variation in Language, and Creole Genesis, Attitudes and Discourse.

The Ebonics controversy in my backyard: A sociolinguist's experiences and reflections
This paper, which will be published in Journal of Sociolinguisics in 1998 or 1999, is part of a collection of essays on the theme, "What do sociolinguists have to say about the Great Language Debates of Our Times?" compiled and edited by Monica Heller. Three of the papers in this collection (including mine) were first presented at the 1997 conference on New Ways of Analysis Variation, held in Quebec, Canada.

Using the Vernacular to Teach the Standard
This is a revised version (March 25, 1998) of remarks delivered at the California State University Long Beach [CSULB] Conference on Ebonics held on March 29, 1997, and will appear in the proceedings (ed. by Gerda DeKlerk), to be published by CSULB in 1998

Suite for Ebony and Phonics
This commentary was written for the December, 1997 issue of Discover magazine. It differs slightly from the published version, reflecting editor's changes.

Dialect Readers Revisited
Written in collaboration with my wife, Angela, and published in 1995, this paper examines the use of dialect readers written in African American Vernacular English [AAVE--the term linguists use more often for what most people are now referring to as Ebonics] to improve the reading abilities of African American children in the inner cities.