MORE #1 HITS THAN The Beatles, The Beach Boys, The Rolling Stones and Elvis Combined 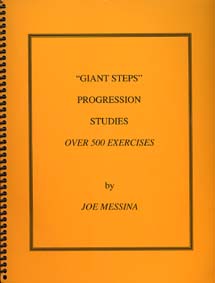 My heartfelt message for you is that you find luck and happiness in your life.  I'd like to share some advice so that you will have both. One thing I know is that when you are in school, please work hard to learn as much as you can. If you work hard, I know that you'll get lucky. Work and luck go hand in hand. With enough work you may be able to make your own luck.
A little knowledge of the computer can also go a long way, and I suggest everyone apply themselves to the use of a computer. For example, I used a computer to write my book. First off, you need to get a computer-music program for writing and arranging music. That is what I did, and I am not as young as you, I am in my 7th decade! If I can learn to do this, so can you.
I would also like your teachers, your school board and your parents to support the arts in your school curriculum; they should introduce you to literature, drama, and music. This opens up all the possibilities that lie within you.

Music, of course, has been an important part of my life.

I studied a system of music called "The Schillinger System of Musical Composition" by Joseph Schillinger. Mr. Schillinger is both a teacher of music and mathematics, and combined the two together. With the use of permutations, one could gather ideas upon ideas. This system is used for scoring music for movies. I also applied this system to my guitar playing, which gave me a different perspective to playing and thinking as a composer rather than just as a guitar player.

I would like to mention chords, a very important part of music. A chord is the union of two or more sounds heard at the same time. Chords add color to music. Henry Mancini wrote a song called "Moon River," which is a song written with diatonic notes. These are notes only of a major scale and in the key of "C," which are all the white keys you see on the piano. When Mancini put harmony (chords) to the melody it became a wonderful work of music. Chords can and do consist of notes outside of the diatonic scale.

When learning an instrument or composing music, the teacher opens the door, but you must enter by yourself to learn about the wonderful world of chords. All the great composers, such as Mozart, Beethoven, Chopin, Brahms, Debussy, etc. had great knowledge of chords.

Remember accomplishment and success are often the result of commitment and perseverance.

Work hard, good luck with your studies, and I wish you . . .

Joe Messina says" I was inspired to write this book because a serious student will need to know the basics of music theory.

WHAT YOU WILL LEARN FROM MY BOOK?

Advanced Student: Over 500 phrases over the Giant Steps cycle
using a large variety of scale choices. Learn new ways to color and texture these elusive changes.Messina is the creator of an alternative music technique known as The Interval Study Method, which uses the chromatic and diatonic scales to create music. He still resides in Detroit, where he performs as a jazz musician.

If you practice these exercises and can master these classic jazz changes you will find your reward when you go to improvise and can play the basics cold. With all the different combinations in my book you will be ready to play your best. That is the goal of every true artist.


Among Messina's influences are Charlie Parker, Les Paul, and George Barnes. In his early days, Messina played a Gibson L5 guitar, and later moved over to an early 1960s Fender Telecaster with a Jazzmaster neck strung with flatwound strings. 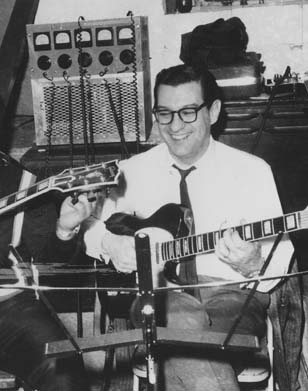 9/04 Harry Walker came to visit me and gave me the CD with these songs on it. Harry's wife taped portions of the show from from the 1/2 hour radio show called "The Harry Walker Trio Featuring Joe Messina" airing from Canada.

1953 Soupy Sales made its debut on November 10, 1953. A typical show opened with Soupy doing a short standup routine, followed by guests, comedy and music. The house band, “Two Joes and a Hank,” was led by WXYZ’s musical director Hal Gordon, with members of Motown’s famed “Funk Brothers” Joe Messina on guitar and Jack Brokensha on drums and vibes. Joe Oddo on bass and Hank Trevision on piano rounded out the group.

Thanks to Allan Slutsky's Vision: Standing in the Shadows of Motown

March 21, 3013 Motown's Funk Brothers to get star on Hollywood Walk of Fame

The Funk Brothers will get their Star on the Hollywood Walk of Fame.
The much-fabled, long-neglected Motown studio band is set to be immortalized in the sidewalk near Hollywood and Vine, with a ceremony that’s expected to include surviving Funks Joe Messina, Eddie Willis and Jack Ashford. The Funk Brothers will join a Walk of Fame that already honors many of the Motown acts whose grooves they provided, among them the Supremes, Stevie Wonder, the Miracles and Marvin Gaye.

2005 JOE MESSINA INDUCTED INTO THE MUSIC HALL OF FAME MUSEUM

THE MUSIC HALL OF FAME MUSEUM - honors musicians of all styles 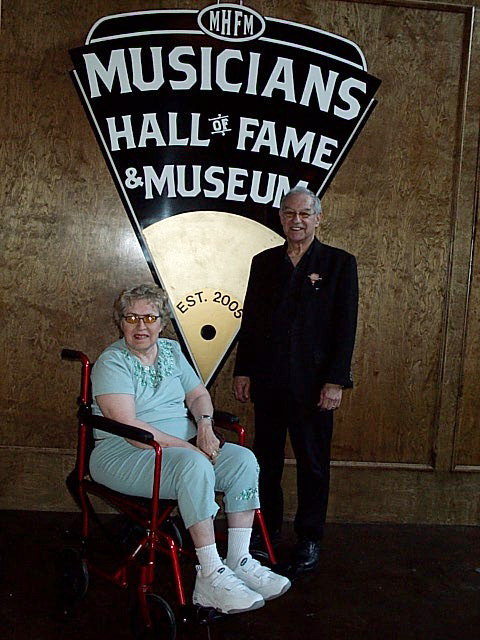 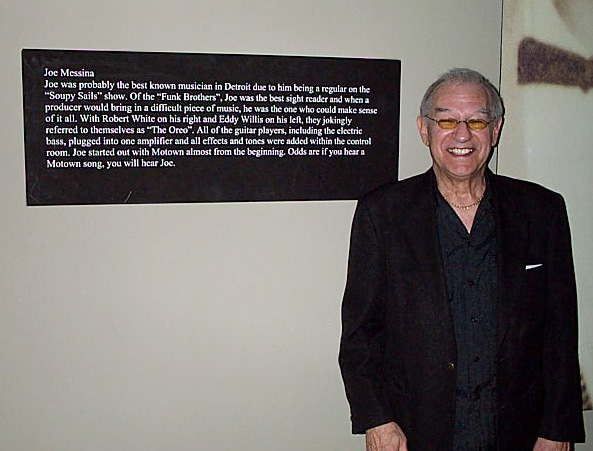 Make Your Webquest About Joe Messina

MAKE YOUR WEBQUEST ABOUT JOE MESSINA

Notice it should be spelled "Soupy Sales"

Joe Messina (born in Detroit, Michigan on 13 December 1928) is an American guitarist. Dubbed the "white brother with soul", Messina was one of the most prolific guitarists in Motown Records' in-house studio band, the Funk Brothers.
Messina started playing guitar as an adolescent. By his mid-twenties, Messina was playing in the ABC Television studio band, accompanying guests that included Sonny Stitt, Charlie Parker, Stan Getz, Jack Teagarden, Lee Konitz, Jimmy Giuffre, Pepper Adams, Donald Byrd, Eddie (LockJaw) Davis, Frank Rosolino and Dizzy Gillespie, among others.
Also while at ABC, he played on the nationally televised Soupy Sales Show alongside notable guests such as Miles Davis and Charlie Parker.
In 1958, Motown Records founder Berry Gordy recruited Messina for his Hitsville U.S.A. studio musicians group, known as the Funk Brothers. In the 1960s and early 1970s, they recorded the instrumentals for hundreds of Motown hit records. During this time, Messina worked with performers such as Diana Ross & the Supremes, The Temptations, Marvin Gaye, The Four Tops, Stevie Wonder, and Smokey Robinson & the Miracles. Among Messina's most notable performances are his turns on hits such as "Dancing in the Street" (Martha & the Vandellas, 1964), "I Can't Help Myself (Sugar Pie, Honey Bunch)" (Four Tops, 1965), and "Your Precious Love" (Marvin Gaye & Tammi Terrell, 1967).

</ JUST A FEW OF THE HIT SONGS THE FUNK BROTHERS PLAYED ON.