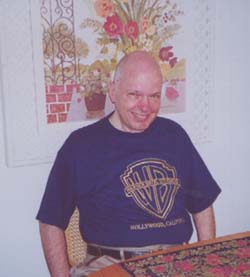 [David Goldenberg was my 2nd cousin once removed.
This picture was taken March 2001, 4 months before he passed away. ]

David Goldenberg, 63, a pharmacist, record collector and film preservationist who accumulated a trove of more than 10,000 classic recordings and early-movie sound tracks, died Wednesday of complications after exploratory back surgery at Abington Memorial Hospital.

A Philadelphia native, Mr. Goldenberg had lived in Rydal for 18 years in a house that was part family home and part repository for thousands of thick, jet-black 78-r.p.m. records dating to the 1920s and '30s.

A founding member of the Vitaphone Project, a group of collectors devoted to saving early movie sound tracks, Mr. Goldenberg made a significant contribution to film preservation recently when he provided the Library of Congress with the only complete sound-track discs for the classic 1933 film The Emperor Jones.

THE EMPORER JONES:
By murder & guile, a black Pullman conductor becomes THE EMPEROR JONES on an impoverished Caribbean isle.
Eugene O'Neill's allegorical fable comes alive in this unique and intriguing film, recently restored by the Library of Congress. The legendary Paul Robeson dominates the film as a man who abandons his wife & Baptist upbringing to worship himself, wallowing gleefully in sin & violence as long as it furthershis goal for power & riches - the chance to become an emperor of his own tiny domain is merely the latest opportunity in a serendipitous sequence to be exploited.

"Finding lost pieces to these films is especially significant when you consider all the film that has been lost over the decades," said John Newton, a friend and cofounder of the Vitaphone Project.

Mr. Goldenberg began collecting as a 14-year-old after hearing early jazz and popular music on the radio in the Upper Darby home of his father, a cantor at a local synagogue. The boy collector spent a nickel for each record. He blithely ignored friends and family members who pointed out that he did not own a phonograph.

"He said he knew someday he would have the money to buy a record player," said his wife of 31 years, Eloise.

The cash value of Mr. Goldenberg's collection has not been fully established, but then he never counted its worth in dollars. He focused on the collection and preservation of classic recordings and relied on the income from his work as a pharmacist to support his private passion.

After training at the Philadelphia College of Pharmacy and Science, Mr. Goldenberg served with an Army mobile surgical unit in the South.

After his discharge, he worked at pharmacies in Delaware and West Philadelphia. In his off hours, he haunted a West Philadelphia jazz club, an experience that only intensified his interest in collecting.

He became active with the International Association of Jazz Record Collectors and the Association for Recorded Sound Collections, and he mentored younger collectors.

Mr. Goldenberg worked 20 years as a pharmacist for the Albert Einstein Medical Center. He joined Express Scripts, a mail-order pharmacy in Bensalem, six years ago.

In addition to his wife, he is survived by a daughter, Rachel, and a brother, Joseph.

Funeral at 12:30 p.m. 7/22/01 at Goldsteins' Rosenberg's Raphael-Sacks at 310 Second Street Pike in Southampton. Burial will be at Shalom Memorial Park in Lower Moreland Township.
http://inq.philly.com/content/inquirer/2001/07/21/obituaries/O-PGOLD21.htm

Robert and Molly Freedman Jewish Music Archive contact yidsong@pobox.upenn.edu
David was President from 1989-91 and was a Trustee from 1978-83.
The archives were established by Gunnar A. Jacobsen before David died. After his death they honored him by naming the archive after him. The archives house, among other things, past issues of  IAJRC Journals, books, records, copies of our recordings (both LPs and CDs) and miscellaneous papers.
Located on the 6th floor of Penn's Van Pelt-Dietrich Library, Room 453, this musical  research library, international, and multi-lingual in scope, is a collection of  approximately 5,300 Judaic sound recordings, in various formats (78, 45 and 33rpm, reel to reel and cassette tapes, compact discs, videos and DVDs).

David Goldenberg was my 2nd cousin once removed, unfortunately we never met.

My maternal great grandfather Joseph Lichtman was responsible for bringing David Goldenberg's family to Philadelphia from the Vincovitz & Zinkover area of the Ukraine in 1922. I've learned that Vincovitz is now known as either Vinkivtsi, Vin'kivci, or Van'kovichi or Van'kovitse (Van'kovichi), located 324.7 miles W of Kiev Ukraine Vinkivtsi is an urban-type settlement in the Khmelnytskyi Oblast in western Ukraine. It serves as the administrative center of the Vinkivtsi Raion, housing the district's local administration buildings.

As a little boy, Sam Goldenberg (David's father) was thrilled at seeing his first electric light and his first movie and later became an elementary school teacher, cantor and a choir leader. The 2nd Choir leader in the family.

After being told the story about David Goldenberg collecting jazz music and his repository / archive it struck me - how I have so much in common with my 2nd cousin David and how collecting music & singing runs in my family.

I am also a teacher, have collected music, and now have a connection with the etymology of jazz. My mother's first cousin Gloria, a music teacher, has a daughter (my 2nd cousin) Marci, who inherited that big voice, perfect pitch, sang in the opera and is now a cantor in N.J.

I am Karen Ellis publisher of the Educational CyberPlayGround and

The Historic Electronic Online Archive of Children's Folk songs. A Public Folklore Project built by the children of the United States and territories. SEE ONLINE VIDEO

Helped to produce the Movie "Standing in the Shadows of Motown" that documents the life and times of musicians known as The Funk Brothers and won 2 grammys 2003 and was nominated for best documentary.

Amercian Book Award Winner Dan Cassidy got help with my research on The Etymology of Jazz
Irish American Vernacular English.
It takes the gift of the goddess to reunite Karen Ellis, (David's cousin) the key 1982 "gin-i-ker" citation from the 1940's scholarship of Peter Tamony described by labor leader and folklorist Archie Green as "the keeper of the lore of the Irish clans of San Francisco."; the internet, and Professor Dan Cassidy to connect the source of the word "Jazz" is from Kildare, Ireland.

2017 Are folklorists doing anything to celebrate the centennial of the first jazz recording?

Eric Schopmeyer is an author, composer, instrumentals, indy film composer, and musician in Portland, Oregon. He currently works as an Orff-trained elementary music teacher and scores films on the side. He has created music for many local, independent films as well as larger, national films that have screened at Sundance and other US and international festivals. His music is occasionally heard in PRI’s This American Life.