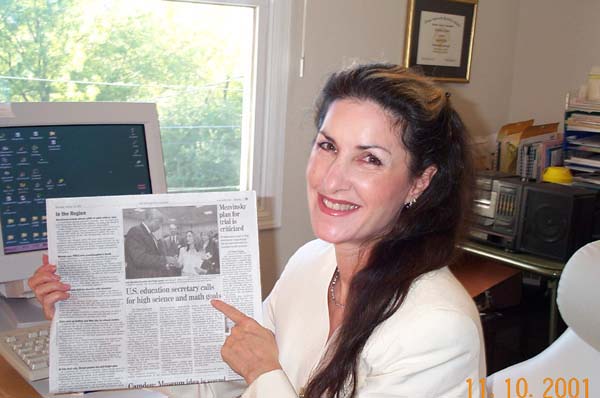 U.S. Secretary of Education Rod Paige said yesterday that creating a national education system that sets high standards in math, science and other basic skills is an essential part of building a strong nation.

"Education is a national security issue," Paige told education researchers from six nations who are meeting in Philadelphia.

(Providence, RI) - The new Education Act, signed into law by President Bush, does more than redefine the federal role in education. It also establishes the arts as a "core academic subject" in elementary and secondary schools, on an equal footing with math, science and English.

Secretary of Education Rod Paige, in a recent interview, said, "I think music and arts education should be considered a core subject. There is absolutely no conflict between the expansion of our fine-arts programs and our music programs and focus on other academic programs. The whole thing means we want excellence."

Declaring the arts a "core academic subject" is a victory for artists and arts educators, who have long argued that the arts are a basic part of education, not only for the value of learning about different art forms and cultures, but also because the arts help all children to learn in verbal and
non-verbal ways.

This declaration is particularly important in Rhode Island, according to State Arts Council director Randall Rosenbaum. "The arts play a significant role in education reform here in Rhode Island." says Rosenbaum. "The State Department of Education and the Arts Council have been exploring ways in which the arts can be part of every young person's educational experience.

Through this language whenever national programs are targeted to "core academic subjects" as defined in the act, the arts will be eligible to receive federal funds. This means more opportunities for support in such areas as teacher training, professional development, and technology.

What do Administrators, Teachers, and the Public need to know about American Dialect Speakers?
Find out more about literacy and approaches to improving it. Learn how to successfully bridge from the Dialect Speakers' home language to the Standard.

Department of Education Secretary Rod Paige calls on educators and school boards to support a new technology push. Speaking at the January 25th National Summit on Education Technology, Paige said "It's pointless to integrate [computers and online links] if they don't add value to the curriculum," and urged schools to collaborate with private industry to ensure technology investments don't go to waste.