Susie King Taylor — First Black Civil War Nurse
Susie King Taylor was born into slavery in 1848 in Savannah, Georgia and given the name Susie Baker. Her grandmother was determined that Susie would not be denied an education, even though it was a crime at the time for black children to be educated. She sent Susie to a friend to learn how to read and write. Susie also received other “freedom lessons” from different families in Savannah. She once recalled, “We went every day about nine o'clock, with our books wrapped in paper to prevent the police or white persons from seeing them.”
Susie grew up to become the first black Civil War nurse and the only one known to have kept a diary, and she eventually recorded her experiences in a book.
Susie Baker King Taylor was the first African American to teach openly in a school for former slaves in Georgia. As the author of  Reminiscences of My Life in Camp with the 33d United States Colored Troops, Late 1st S.C. Volunteers, she was the only African American woman to publish a memoir of her wartime experiences.

A History of the Black Pioneers
The first thing one needs in order to understand the history of this regiment is a definition of the word "pioneer" as it pertained to the military in the 18th Century.

Biographical Sketches of Black Pioneers and Settlers of the Pacific Northwest

Dr. Mark Dean an African American Born 3/2/1957 is a Ph.D. from Stanford University, architect of the modern personal computer, holds 3 of the original nine patents on the computer that all PCs are based upon. He is in the National Hall of Inventors and has more than 30 patents pending. He is a vice president with IBM. Dr. Dean helped start a Digital Revolution that created people like Microsofts Bill Gates and Dell Computers Michael Dell. Millions of jobs in information technology can be traced back directly to Dr. Dean. Other Black American Inventors John Stanard, inventor of the refrigerator, George Sampson, creator of the clothes dryer, Alexander Miles the elevator, Lewis Latimer the electric lamp. He led the team that developed the ISA bus, and he led the design team responsible for creating the first one-gigahertz computer processor chip. IBM Fellow and vice president, Almaden Research Center

James Meredith, (center of the picture), was the first African American student accepted by the University of Mississippi. 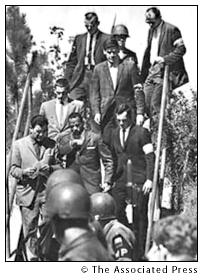 Mississippi Desegregation Suit Settled for $500 Million
By Michael A. Fletcher April 24, 2001; Page A01 http://washingtonpost.com/wp-dyn/education/A55255-2001Apr23.html
Mississippi agreed yesterday to end more than a quarter-century of legal battles over the desegregation of its higher education system, reaching a $500 million settlement intended to remedy decades of state-sanctioned racial discrimination.The agreement with the U.S. Justice Department and a group of black Mississippians, filed yesterday in federal court in Oxford, Miss., could mark the end of a class action lawsuit initiated in 1975 to desegregate the state's public colleges and universities. A federal judge must approve the settlement.The lawsuit sought to improve academic programs and facilities at the state's three historically black universities: Jackson State, Alcorn State and Mississippi Valley State. It alleged that those schools offered educational opportunities inferior to those at the state's five traditionally white universities because of Mississippi's history of racial discrimination. After a protracted legal battle and nine years of fighting over proposed remedies, the state agreed to a major infusion of funds for the long-underfunded black schools. [SNIP]

Classes To Teach Black Men `Proper English'
by Nancy Trejos Associated Press The Seattle Times Extra Copyright © 1997 Nov. 24, 1997
WASHINGTON - Thirty-five years after becoming the first black student at the University of Mississippi, James Meredith has created an institute to teach black men and boys to abandon the use of black American English. "Most people aren't aware that black English is more foreign to American English than any European language," Meredith told a news conference yesterday.
Meredith said he has "no problems" with black English, which caused a stir last year after the school board in Oakland, Calif., voted to recognize black American English, or "Ebonics."
"I'm simply saying (black males) won't be intellectual giants unless they learn proper English," he said. Meredith said his Mississippi-based Meredith Institute will offer weekend classes to supplement the curriculums of regular schools in hopes of making the black male "as comfortable in the library as he is on the basketball court."
The key to making black males competitive in American schools, Meredith said, was changing "the concept of the black race." "The black race is against intellectual development. Particularly for a black male, to be an A student . . . you become unacceptable."
The schools will not be open to girls or women, Meredith said, though they may sit in on classes by paying the $50 fee. "In the family, the women are still going to come out ahead," he said. Each school, financed through donations and student fees, will be open to 50 to 200 boys and men. The Institute's first school, the Library School for Black Boys and Men in Jackson, Miss., is scheduled to open in January. A second school is to open in February in San Diego.

Mississippi Can Solve The Race Problem
February 9. 1998 Page 3 by James Meredith
Unbeknownst to most Americans, Mississippi has always set the pattern for relations between the races in America.
More than half of all people classifed as black in Mississippi were classified as such between 1833 and 1890 because of their native American blood rather than because of any African connection as most people have been taught to believe.
It was Mississippi that perfected the plantation system for the most efficient and effective use of slave labor. It was Mississippi that violently established white supremacy as a way of life following slavery.
It was Mississippi that established white supremacy as a Constitutional, legal and official system of government in 1890. A system copied by every state in the South and a Constitution that still survives as law of the land in Mississippi to this very day. Mississippi has always set the standard because it had the largest percentage of black race population than any other state, therefore, the most compelling reason to find a solution to deal with the problem. Four times Mississippi got the answer wrong.
This time Mississippi, thanks to the leadership of Ole Miss, Mississippi is getting it right. Mississippi has decided that Americas is for everybody. Every citizen is entitled to every right and privilege of citizenship and every citizen should shoulder every burden of responsibility that citizenship requires.  The only remaining shor-coming is the lack of competititiveness of the black male in Mississippi. He can not read, write, understand, or use the proper English language.

As the first member of the black race to attend and graduate from Ole Miss, I am personally taking on the responsibility of seeing to it that the black male in Mississippi becomes proficient in the proper use of the English languahge to at least the 5th grade level. When the black male becomes competitive in the work force in Mississippi the Race problem in America will be over.

John Figueroa
A poet, teacher and champion of Caribbean culture 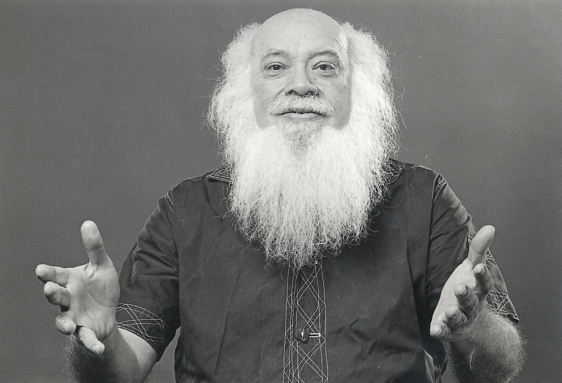 John "Fig" Figueroa was a man of many parts: a scholar and a gentleman, a broadcaster with the BBC World service, a cricket buff, a critic and literary figure, a francophile and hispanophile, a champion of Caribbean culture in all its complexities, a writer with journalistic fluency in the best sense, and above all else perhaps, a poet. He was the first native West Indian to win a chair at what was to become the University of the West Indies. More from David Sutcliffe