Norman Jackson - Tlingit Carver Ketchikan Alaska is of the Tongass Tlingit of southeast Alaska and was born in Ketchikan, Alaska. His lineage is from his mother who is of the Tongass Tlingit Kaats Hit Bear House of southeast Alaska. His father is Kaagwaantaan Tlingit of Klukwan, Alaska.
The Killer Whale is on the Eagle side and Salmon is the Raven side, so they can get married. 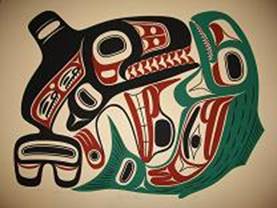 It is balance of marriage. When Norman designed this print, he was inspired by a couple who are his close friend. The faces in the Killer Whale are Killer Whale's children. The image between the Killer Whale and the Salmon is a Human and represents the connection of the human world and animal world.
Jackson is a recognized Master Artist in metal engraving by the Alaska State Council on the Arts Master Apprentice Grant and has received numerous honors for his excellence in wood carving. [more]

American Historical Images On File
"This collection of historical photographs is provided with the permission of Facts on File, Inc., and is a comprehensive collection of images of Native American people. The collection is arranged chronologically from the prehistoric period and the Paleo-Indians to 1990 and the appointment of R. Richard West as director of the National Museum of the American Indian. The collection includes information and images which describe the lifeways of various tribes and include historical entries for particular Indian groups. Narrative is provided that provides the historical and cultural background describing the event, person, or subject presented."