How to protect your online art

WHAT TO DO WHEN YOUR IMAGES ARE USED WITHOUT PERMISSION
Some lawyers make their living off suing publications for unauthorized use of photographs. Cease and desist letter from your attorney. Your photo is your property. It’s NOT in the public domain just because you posted it. Send them an invoice - x dollars for every instance they use it. Every separate unauthorized reuse demands an additional fee.

Judge: News Agencies Can't Use Twitter Photos Without Permission
Fox News isn't actually a news channel, they're classed as an entertainment channel. They ask, the photographer says no, they shrug and use the pic anyway. It's their usual method. They just decided to ignore the NO. News outlets should have asked permission before using a Twitter picture from a photojournalist. According to the court's ruling, Agence France-Press violated the copyright of photojournalist Daniel Morel by taking photos of a 2010 earthquake in Haiti that he tweeted and disseminating them without permission via Getty. The Washington Post, the court found, violated Morel's copyright by running four of the photos from Getty also without Morel's permission, according to Reuters. Twitter's Terms of Service lay at the center of District Judge Alison Nathan's decision: While the AFP argued Morel's work was free to use once posted to Twitter, Nathan instead found that Twitter's Terms of Service required that news outlets first get permission before running tweeted photos. Nathan, however, did rule that the retweeting of such photos is allowed. Twitter has long held that photographers own their tweeted content. The company's Terms of Service section on copyright maintains that "Twitter respects the intellectual property rights of others and expects users of the Services to do the same." example

Archiving The Internet with Jason Scott @textfiles
There are all these ethics and concerns, and they never got cooked in, because they internet went from experiment to critical infrastructure way too quickly.

Photographer Suing Getty Images for $1 Billion
Renowned photographer Carol M. Highsmith is reportedly suing Getty Images for $1 billion, claiming that the stock photo company committed copyright infringement through the “gross misuse” of 18,755 of her photographs documenting America. The 70-year-old Highsmith filed her lawsuit on July 25, 2016, in the Federal Court of New York, claiming that Getty has been charging licensing fees for the use of her photographs without her consent.
Highsmith has spent many years photographing in every state of the United States, creating an enormous visual record of the early 21st century. What likely complicates this dispute is the fact that Highsmith has donated her lifetime archive of photos to the Library of Congress, which the library calls “one of the greatest acts of generosity in the history of the Library.” The photographer’s photos are listed on the library’s website as being in the public domain with “no known restrictions on publication.” However, Highsmith says she never abandoned her photo copyrights, and says she found out about Getty Images charging for her photos when she was sent a letter from Getty that demanded she pay for her own photo that was being displayed on her own website.
In addition to accusing Highsmith of copyright infringement involving her own photo, Getty reportedly also sent similar demand letters to other people using Highsmith’s public domain photos. “The defendants [Getty Images] have apparently misappropriated Ms. Highsmith’s generous gift to the American people,” the lawsuit reads. “[They] are not only unlawfully charging licensing fees…but are falsely and fraudulently holding themselves out as the exclusive copyright owner.”
While the statutory damage liability for Getty in this case is $468,875,000, PDNPulse reports that Highsmith is seeking $1 billion based on the precedent of photographer Daniel Morel’s lawsuit against Getty, in which he was awarded $1.2 million for the widespread infringement of one photo.

Photographs and especially videos of the NYPD's actions during the occupation of Wall Street have sparked outrage and media attention regarding the protests, which have now spanned ten days. Accordingly, witnesses, including our own photographer, tell us that the NYPD has been specifically targeting photographers and videographers for arrest. Two protestors who were maintaining the live video feed of the protests were arrested on Saturday, the first claiming that she was detained solely because she was holding a camera. "Those are the first people the police go after," protest organizer Patrick Bruner tells us. "They're always the first to get held up."
While it is well within a protestor's right to film a demonstration or an arrest, NYCLU spokesperson Jennifer Carnig tells us, "You cannot interfere with police action, i.e. get in the middle of an arrest to take a photo or make a video." It may be a stretch to say that those operating the protest's live stream would be able to physically "interfere" with an arrest while holding a laptop.

"When in public spaces where you are lawfully present you have the right to photograph anything that is in plain view. That includes pictures of federal buildings, transportation facilities, and police. Such photography is a form of public oversight over the government and is important in a free society."

Photography is not a crime.

The Photographer's Right - A Downloadable Flyer 2003
Your Rights When Stopped or Confronted for Photography
The right to take photographs is now under assault more than ever. People are being stopped, harassed, and even intimidated into handing over their personal property simply because they were taking photographs of subjects that made other people uncomfortable. Recent examples include photographing industrial plants, bridges, and vessels at sea. For the most part, attempts to restrict photography are based on misguided fears about the supposed dangers that unrestricted photography presents to society.
Ironically, unrestricted photography by private citizens has played an integral role in protecting the freedom, security, and well being of all Americans. Photography in the United States has contributed to improvements in civil rights, curbed abusive child labor practices, and provided information important to investigating crimes. These images have not always been pretty and often have offended the sensibilities of governmental and commercial interests who had vested interests in a status quo that was adverse to the majority in our country.
Photography has not contributed to a decline in public safety or economic vitality in the United States. When people think back to the acts of terrorism that have occurred over the last forty years, none have depended on or even involved photography. Restrictions on photography would have not prevented any of these acts. Similarly, some corporations have a history of abusing the rights of photographers under the guise of protecting their trade secrets. These claims are almost always bogus since entities are required to keep trade secrets from public view if they want to protect them. Trade secret laws do not give anyone the right to persecute photographers.
The Photographer's Right is a downloadable guide that is loosely based on the ACLU's Bust Card and the Know Your Rights flyer. It may be downloaded and printed out using Adobe Acrobat Reader. You may make copies and carry them your wallet, pocket or camera bag to give you quick access to your rights and obligations concerning confrontations over photography. You may distribute the guide to others provided that such distribution is not done for commercial gain and credit is given to the author.
~ BERT P. KRAGES, ATTORNEY AT LAW
6665 S.W. Hampton Street, Suite 200
Portland, Oregon 97223

Securing the rights to use a picture

Securing the rights to use a picture of a painting - do a search for ARS (Artists Rights Society), CISAC, and others. If you can determine where image is, physically (a museum?) you  could contact their rights & permissions department - often, when an image is reproduced, one of the stipulations is to identify the owner of the work. If you've got an art museum near you, give them a call and ask how to contact these groups. The registrar's office should know. 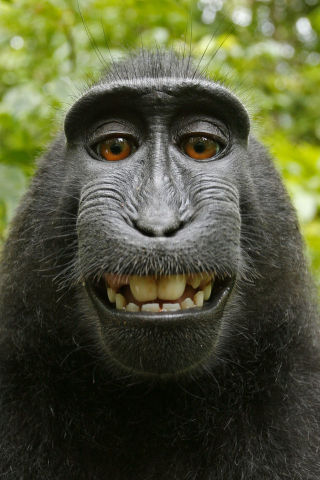 2014 Wikimedia Says When a Monkey Takes a Selfie, No One Owns It In the recently released U.S. Copyright Compendium, which lays out regulations about the registration process for copyrights, one sentence stood out from the rest of the 1200-page document, and is as follows: “The Office will not register works produced by nature, animals, or plants, which includes a photograph taken by a monkey.” It stood out because three years ago, David Slater, a British photographer, traveled to Indonesia to photograph monkeys. While there, he had his camera snatched by a monkey and the monkey ended up taking some amazing photographs with his camera. Slater published these photos, and later discovered that one of them was published on Wikipedia without his permission. Slater wanted the photo taken down, but Wikipedia refused because the photo was taken by the monkey and not him, thus making it public domain. It's interesting that it says "works produced by animals" since humans are, of course, animals. They could have said "works produced by non-human animals" - but they didn't.

ILLEGAL ART
WILLFUL INFRINGEMENT (2003, 58 min.), Produced by Jed Horovitz, Directed by Greg Hittelman. legal scholars, artists, DJ¹s, Star Wars fans, teachers and many more tell an "extraordinary" tale about how ownership of ideas has come into conflict with free expression. You can go now to www.willfulinfringement.com to see free clips, buy the DVD, or stream the whole movie for a donation.

Immediate Removal for Legal Cause:

Immediate Removal for Legal Cause:

If you believe that your work has been copied in a way that constitutes copyright infringement, or your intellectual property rights have been otherwise violated, please provide Yahoo!'s Copyright Agent the following information:

Yahoo!'s Agent for Notice of claims of copyright or other intellectual property infringement can be reached as follows:

In addition to submitting your legal request for immediate removal, we also require that you follow our Standard Removal Procedure and employ a robots.txt file to ensure that your files are not accessed by our crawlers in the future.

"I swear, under penalty of perjury, that the information in the notification is accurate and that, for each image identified above, I either own the copyright or am authorized to act on behalf of the owner of an exclusive right that is allegedly infringed."