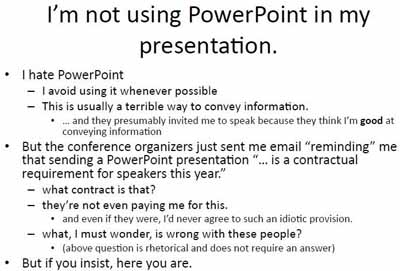 We Have Met the Enemy and He Is PowerPoint
Gen. Stanley A. McChrystal, the leader of American and NATO forces in Afghanistan, was shown a PowerPoint slide in Kabul last summer that was meant to portray the complexity of American military strategy, but looked more like a bowl of spaghetti. When we understand that slide, well have won the war, General McChrystal dryly remarked, one of his advisers recalled, as the room erupted in laughter. 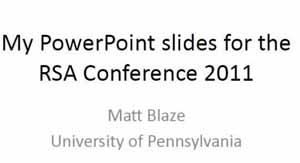 PowerPoint: Killer App? August 30, 2005; A17
Did PowerPoint make the space shuttle crash? Could it doom another mission? Preposterous as this may sound, the ubiquitous Microsoft "presentation software" has twice been singled out for special criticism by task forces reviewing the space shuttle disaster.

Perhaps I've sat through too many PowerPoint presentations lately, but I think the trouble with these critics is that they don't go far enough: The software may be as much of a mind-numbing menace to those of us who intend to remain earthbound as it is to astronauts.

PowerPoint's failings have been outlined most vividly by Yale political scientist Edward Tufte, a specialist in the visual display of information. In a 2003 Wired magazine article headlined "PowerPoint Is Evil" and a less dramatically titled pamphlet, "The Cognitive Style of PowerPoint," Tufte argued that the program encourages "faux-analytical" thinking that favors the slickly produced "sales pitch" over the sober exchange of information.
Exhibit A in Tufte's analysis is a PowerPoint slide presented to NASA  senior managers in January 2003, while the space shuttle Columbia was in the  air and the agency was weighing the risk posed by tile damage on the shuttle wings. Key information was so buried and condensed in the rigid PowerPoint format as to be useless.
"It is easy to understand how a senior manager might read this PowerPoint slide and not realize that it addresses a life-threatening situation," the Columbia Accident Investigation Board concluded, citing Tufte's work. The board devoted a full page of its 2003 report to the issue, criticizing a space agency culture in which, it said, "the endemic use of PowerPoint" substituted for rigorous technical analysis. SNIP