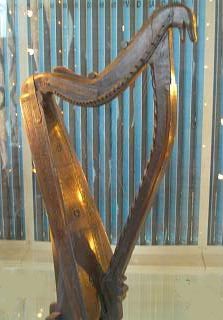 Scottish Roots Lining out or "Precenting the Line"

Learn the History of the Chant and early music

I took this picture in Dublin, Ireland 2006.

Charles Wakefield Cadman was born in Johnstown, Pennsylvania in 1881. He is the great-grandson of the inventor of "buckwheat notes," a form of music writing by which one can tell from the shape of a note whether it is do or re or mi, and so on. The first shape notes to appear in print happened in Pennsylvania. The first book printed with shaped noteheads, using "patent notes" was the Easy Instructor, by Wm. Smith and Wm. Little in 1801. The shapes used then are still in use to this day. Shape-note hymnals indexes are by first line and by tune name. For those who don't know, "tune name" is the official name of the melody separate from the lyrics.

This essay explores "Hoboken-style" Sacred Harp singing of the Okefenokee region of southeast Georgia and northeast Florida. It considers the history of this tradition, distinctive characteristics of this variant of Sacred Harp, and how "Hoboken-style" leaders have negotiated rapid change while maintaining core values of memory, legacy, and spiritual meaning.

Almeda Riddle was born in 1898, near Greer's Ferry, Arkansas and lived her entire life in that area. Her father was a fiddler, a singer, and a teacher of shaped-note singing. The church she attended throughout her life used unaccompanied singing and this practice reinforced her use of traditional unaccompanied style as a ballad singer.
This video tells how and where Almeda Riddle began her 10 year stint of singing old ballads all over the country. In an informal manner, folk musician Starr Mitchell chats with Riddle about her singing tours and her commitment to preserving the past for the future. The video was filmed two years before Almeda's death in 1986.

The Colored Sacred Harp New World Records 80433
The Colored Sacred Harp
A Songbook by Nineteenth Century African-Americans
Performed by the Wiregrass Sacred Harp Singers, Ozark, Alabama
Essay by Barbara L. Hampton
The Colored Sacred Harp is a collection of shape-note songs composed and arranged by African-American musicians in southeastern Alabama and published in 1934. The songs refer to the history of their communities in Alabama, their socio-religious experiences, and their aesthetic values. Folklorist John Work's 1941 study, published in Musical Quarterly, points out that the African- American Sacred Harp, like African music that might be termed religious, is locatable within the practice of an integrated, rather than a compartmentalized, belief system.

Sacred Heart Movie The documentary offers a glimpse into the lives of modern shape-note singers, who still sing from The Sacred Harp, a 160-year-old hymnal first published in Georgia in 1844. Their PR material claims Sacred Harp is "the earliest music in America" is totally incorrect. Enslaved Africans on plantations and even American whites had their own evolving traditional music that early. People living in The American Virgin Islands had singing traditions well established before mainland "America" was discovered. Catholic monks performed Gregorian chants as far back as the early 16th Century in America, and there's a thousand-year history prior to that time. And there are First Nation Lakota singing in America before Gregorian Chants.
America's earliest music wasn't preserved strictly in the rural South either, and of course not by universities or institutions. Among European Americans, there was an 18th century tradition of the singing school -- actually the Sacred Harp was a branch of that. Started in New England, and spread to the mid Atlantic, and the Germans adopted it.
The Pennsylvania Germans -- the Mennonites and the Schwenkfelders especially -- continued the hymnody tradition but in German; the surviving Notenbuchlein from the late 18th and early 19th centuries are examples of teaching tunes that would accompany the hymn words in the Gesang-buch.  They also often have glorious fraktur bookplates.  Later, in the Notenbuchlein, some shape note tunes begin to appear. Schwenkfelder Library & Heritage Center

Alabama Center For Traditional Culture gives a basic history of 7-shapenote in the US and information on the singing groups featured on the CD. Download and listen to Music from Volume 2
Just a Little Talk With Jesus
He's My Best Friend Ceasless Praise P 33
Short History of the Central Union Singing Convention
Give Me Just A Little More Time

Fasola Home Page: This site is a great starting point for singers new to the Sacred Harp tradition. It provides ample information on events, as well as sound essays and a comprehensive bibliography of shape-note related materials.

WIREGRASS SACRED HARP SINGERS ERA 1980 music of Alabamba. Typical of folk tunes they are often in the lonian and Aeolian modes, and occasionally the Mixolydian and Dorian. Many of the melodies are adopted from traditional tunes including Celtic jigs and dance tunes.

See: McGraw family of Georgia, the Denson family of Alabama, and The Wootten Family Sacred Harp in nineteenth century Georgia, who moved to Alabama before the turn-of-the-century. They had fourteen children, all of whom Thomas taught to sing Sacred Harp. The Woottens are what has come to be called a "singing family," a notion of long-standing importance in Sacred Harp tradition. When J. S. James recounted the "History of the Sacred Harp" as it stood in 1904, he devoted fourteen pages to "B. F. White's Children and Grandchildren."The Wootten singing is held each year, on the second Sunday in April, at Antioch Baptist Church near Ider, Alabama. The Sand Mountain area of northeast Alabama where the Woottens live has sustained much traditional culture. In the past, the region's isolation helped preserve many of the folk traditions of its early Scots-Irish settlers, in small Baptist, Methodist, or Holiness churches. Video - the story unfolds, fragment by fragment, we see how deeply family members share the sense of awe at Beulah's fulfillment of her wish to "die a-shoutin'.

The Colored Sacred Harp contains 77 songs - THE JUDGE JACKSON FAMILY Judge Jackson was born in Montgomery County, eight miles west of Orion, March 12, 1883, near a little village named Bryhill, Alabama.  He lived there with his family for about nine years later moving to Ansley, Alabama. >He went to school for a short time, but school for African Americans were not so much in those days especially in rural communities.

Book Review: Traveling Home: Sacred Harp Singing and American Pluralism While Bealle's research focuses on "folksong" as the root concept for interpreting Sacred Harp, Miller focuses on "diaspora." One of the advantages of speaking of Sacred Harp singing as a diaspora is that Miller can transcend well-worn notions of "tradition" and "revival."