I witnessed when the original internet became big in the 90s the "golden era" of the internet – before legislation, surveillance and monopolisation took control. In 2014 the darknet has the potential to be a bastion of free speech and creativity, where art can escape surveillance and commercialism.

We care about teaching children to read, the arts, language rights, and censorship.

Honoring the unknown culture maker must run in the family.

In 1976-79 during my lunch hour when teaching at Ricardo Richards elementary school on St. Croix, U.S.V.I. I collected children's indigenous playground poetry then copyrighted the live sound field recording compilation in 1979 when Joe Hickerson was the director of the Archive of Folk Culture at the Library of Congress.
This photo was taken during the 1957 Folksmiths tour of summer camps.
(L-r): David Sweet, Joe Hickerson, Chuck Crawford, Ruth Weiss, Sarah Newcomb. 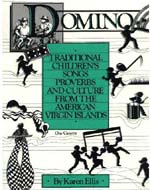 I celebrate the Unknown Culture Makers
Keepers of the Oral Tradition.
DOMINO published by Guavaberry Books

Thirty Years Ago I collected children's indigenous playground poetry; the clap pattern game songs, and chants from the American Virgin Islands. Then developed a curriculum using their game songs to teach reading. And you can do this for yourself and your children. More About My Work

I care about teaching children to read.
I care about those who come to school speaking other than standard english.

In the same tradition of honoring The Funk Brothers who were previously "unknown culture makers" I used Orff Schulwerk to recover the indigenous playground poetry from the children, who are also "unknown culture makers" to develop a Folksong Reading Module, a thematic reading curriculum for children who only spoke Creole and Spanish on the Island of St. Croix, U.S., Virgin Islands in 1976 to 1979.